Located in Brgy. Dolores in Nueva Valencia, Guisi Point is one of the attractions in Guimaras Island. Aside from the 15-minute boat ride from Ortiz, Iloilo City to Jordan, Guimaras, it takes about an hour and thirty minutes to reach the scenic place with a beautiful antique lighthouse, rock formations, and crystal clear water.

The place is quite secluded that you will have to rent a multicab or a jeepney to go there. A multi cab rental costs at around 700 pesos one way (rate as of April 2011 when I went there last). In most cases, it is best to make contact with drivers as there are no passenger routes to the area (except for motorcycles to the nearest passenger pick-up points which is quite uncomfortable with the dusty road). If you are planning to stay for just a day, the cab will have to wait for you until about 4 or 5 pm.

Reaching the place, you can enjoy the short yet not-so-spoiled coastline. A hike from the nearest beach resort will lead you to the hill with the ruins and the lighthouse dating back to the 18th century, not to discount the breathtaking view of the open sea extending to the horizon. Though the original lighthouse was no longer functional, the locals take pride in it as it was the second oldest in the archipelago. The first one is in Cagayan, in the northern part of the country.
Guimaras has been nicknamed “poor man’s Boracay” which many would disagree. With lots of things the province can offer, it would only take more campaigns to keep people coming and for the island to be in the same level if not gain even more popularity than the more famous rival.
Looking Back:

Experiencing this semi-paradise for the first time in 2006 with a friend’s invitation, we saw few tourists full with awe as Guisi was a place for exclusivity. From the dirt road on the top of the beach, the water was blue and clear enough to see the stones and the corals. The hills that envelop the shore are a great eye strain reliever as they are lust greens placed against the bluish background of the water’s reflection. The serenity of the place made it an ideal spot for contemplations. With the attributes, it was a perfect place to go camping, boating or island hoping. There are small islands and caves nearby that not too many have explored. Back then, accommodation was too expensive as there was a single resort catering the newcomers. There used to be an abalone farm in the area, too.
Unplanned return:
On the island for a festival, I found myself trekking the dirt roads I once think was too uncivilized. Five years after the first visit, I have rested my sight on the place that has captivated me so much for years. The breath taking scenery is still there, though it is not as vibrant and pure as it once was. With a couple of resorts that sprouted, the place has been a bit crowded. Though there is ease in finding more accessible facilities at a price cheaper than it was, there are countless things obvious enough to those who are not first timers. With the number of people it accommodates over the years, the area has become more commercialized and thus loses the beauty it possessed. The once fine and white sand beach has become stony, the water can still be clearer than other beaches but it is not algae-free. Most of the shady areas we’ve been to were now almost barren and the rocky surfaces of the hills are even wider. With the oil spill that happened, the abalone farm, which is one of the only two in the country, is gone. It is still a fishing village, but now more boats are used for tourist rentals.
The transformation
Take a look at the photos I have compiled from my trips to Guisi Point. (Then and Now)

There is nothing bad about developments. However, people should be responsible enough to at least maintain the beauty of the natural resources. Guisi Point is not the only place I have been to at least twice that has changed a lot since the first visit.
Still enchanting: The picture perfect spots 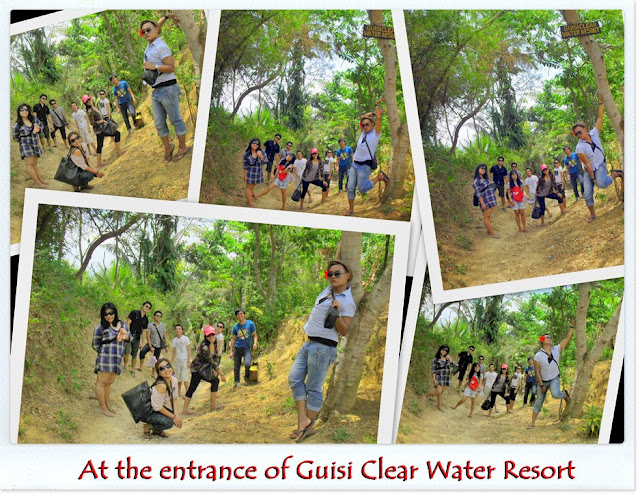