Analysis of Unusual Collocations in Poetry


“Crying cranes and wheeling crows...
I'll remember them," she said;”


With the tense on the first line, being in the present progressive, this poem might be talking about the continuing complications of love or relationship between two people belonging to different or clashing classes. Cranes and crows are birds that do not only differ in genus but also in appearance and characteristics. Perhaps they both have to endure the conflicts being caught in the middle of the two groups.


Both birds are known to go in flocks. A shrilling crane is the one that leads the flock while in flight, searching for the places to land. When the leader gets tired and with its voice slowly fading, one takes over. The author might be talking about giving, leading and cooperating with all having the chance to lead. Crows on the other hand, cries when there is distress, and thus solicit rescue or support even from unrelated flocks. Perhaps the author is expressing the troubles present when both flocks meet. Their beliefs and practices do not thrive.


The characteristics of both birds tell about their ways of bringing in safety, warmth, communication, and importance of family in different ways. Cranes are known to adapt well to environments while the crows are known to pest on farmers’ fields. Cranes tend to fly straight to their direction, while crows are known to wheel or form arcs as they go along, and thus, might not even able to reach destination with their ever-changing mind.


On the second line, when she said, “I will remember them” being in the future tense, she might be talking about finally giving up. The title supports this claim. The word “answer” is used when one has reached a solution or an end point. This might even suffice and punctuates the quest for truth.

POEM 2:
THY HEART
An anonymous poem


“Thy heart is like some icy lake,
On whose cold brink I stand;”


On the first line, the author describes the heart of the subject as an icy lake which is the opposite of what should the heart be- warm. The author might be talking about unrequited love. Perhaps the object of affection shows no interest in the love offered. “Icy lake” would mean that it might as well be dangerous. In most cases, the ice that forms in lakes are thin and weak, and whoever stands there is at risk of falling into the freezing water, causing one to shiver in extreme cold.
The second line tells about the author being on the edge of the cold lake bank (the subject’s heart), having the tendency or probability to fall. This means that despite the awareness of his/her love’s fate, there is willingness to sacrifice or be hurt just to be in someone’s heart.


**** Submitted in compliance with my graduate class in "Literary Genre." It pays to see what others are writing, but it is even more rewarding to crack the lines on your own so copy at your own risk. :)

Analysis of Tennyson's "The Eagle" 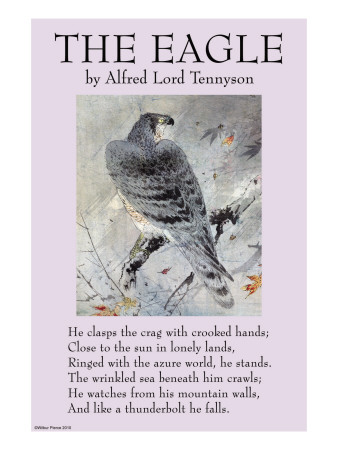 Unusual collocates signal the intention of the writer that there is more to text than what we see in the surface. In Tennyson’s “The Eagle”, he wrote, “The wrinkled sea beneath him crawls” which made use of unusual collocations “wrinkled” and “crawl”. Basically, when the word “sea” is used, adjectives like calm, stormy, misty, dangerous, blue, treacherous, salty, clear, icy, turbulent, peaceful, still, shallow, wavy, deep, cold, rough, warm or freezing can be used. Tennyson is describing the sea beyond literal. He might be describing it from a different perspective using personifications “wrinkled” and “crawls”.

Here, I chopped the parts of the line so each will be clearly analyzed:

The use of a determiner “the” means Tennyson is referring to a specific sea. The modifier, an unusual collocate, “wrinkled” for the head, sea, could be his imaginative description of the big waves or even the land surfaces underneath this body of water. It might refer to the rocks, mountain ranges, hills, plateaus, canyons, or basins that can be seen clearly from the bird’s eye view when the water is clear. This could mean that underneath the water, there is irregularity of surfaces.

In addition, with “wrinkled” being a human quality, this could mean old age and the sea, representing a person rather than a body of water. Tennyson might be talking about old persons, having different attributes and struggles.

This qualifier, a preposition, describes the position of the eagle as represented by the pronoun, him. The eagle is flying directly over the sea. It might have been flying so high that the sea waves looked wrinkled rather than wavy or turbulent. This would mean, however, seeing only the over-all picture from above but not the smaller details when one is close to the water.

The usage of this pronoun to refer to the eagle can also mean that it was given an attribute of masculinity and with it comes the qualities power, superiority or strength. Tennyson might be referring to a leader or someone who belongs to a higher stratum, thus giving it the privilege to see things from above or be higher than the others.

The verb, “crawls”, means the movement of the waves to and from the shore. Since the sea is wide, the smaller movement of the waves can be seen as tiny lines from above. With the waves’ elongated shape, moving horizontally, they look like worms crawling sideways. As I have mentioned in the previous part, with the collocation “wrinkled” referring to old age or maturity, “crawls” might represent otherwise- the young or babies starting to move. With waves being part of the wider sea, it might mean the young among the aged. As the waves move to and from the shore, it could mean, the cycle of life or fulfillment of one’s duty. When some are done, some will have to take over.

Summing up, Tennyson might be referring to a leader who can see people beneath him as he is sitting on his throne. With his kingdom as wide as the sea, there are a multitude of individuals, old and young. He oversees them as they are taking turns in doing their duties or he might have been in power so long he has seen the changes in the cycle from above as I have mentioned about the waves to and from the shore representing the cycle of life. Being positioned above, he could get the general perspective but failed to understand what was happening when he is close to them. When the sea is turbulent, the waves are big and this might mean struggle among those who belong to the flock. This, however, can never be felt by the leader as he is far enough to hear the crashing waves or his subjects’ cry.

**** Submitted in compliance with my graduate class in "Literary Genre."
It pays to see what others are writing, but it is even more rewarding to crack the lines on your own so copy at your own risk. :)
No comments:

Writing has been my first love. I have learned to write early, and it even paid my way through college. After some years of being an English and education instructor, I was given the opportunity to teach what I love the most- journalism.

I remember the day when I, as a senior mass communication student, was tasked by a local daily editor to interview a controversial public official and write an article as part of my internship requirements. How can I forget? That article landed as a banner story, and later found its way to the college's bulletin board. Baptism of fire, it was. I later found out, during a conversation, that my internship superior used to be the editor-in-chief of the school paper I write for. Small world. (See it here)

Back to reality. I was full of excitement for my subject load. For quite a while, I have been wanting to teach journalism or write again.

For some years, there has been a decline on the quality of student writers produced by the school organ. Perhaps it has become a lousy training ground as many schools do not want to invest or spend money to publish school news or grant scholarships to their campus journalists. In most cases, students will only get to read these published writings once or twice a year. Because their are insufficient opportunities, talents in writing are just poured into private journals or diaries that may never be read and thus fall short on advises to develop.

Despite the popularity of social networking sites where one can easily "publish" thoughts, school paper does something unequaled by strongly inculcating a deep sense of professionalism and social responsibility. This is because campus magazines or newspapers train students to express opinions objectively and ethically which improves the dynamism of press freedom.

After  about two months of preparations through seminar-type lecture, my students were able to grasp the concepts on news, editorial, feature, photojournalism, lay-outing, and other related topics. I was happy to discover their strengths on the genre they are good at. Consequently, they are happier to know they can write and judge articles following journalistic conventions.  As expected, they have surpassed my expectations. Well done, people!