Probing into the 'sugar daddy" trend

Is Finding Sugar Daddy in? Are there more women chasing men for their money than men chasing women?

While on my habitual net hopping, I saw a question from someone on Yahoo Answers that made me think twice, or maybe thrice. As a member of the site, I have wanted to answer the question in defense of women, but I think there is truthfulness in it that’s quite difficult to defy (I would like to make clear I am not one of them, lol). But, why does it go that way?

“Why are there more women chasing men for their money than men chasing women? I see this a lot with some of the people I know. I have two cousin’s in the NFL and women are always around them for their money. And its easy to see right through them. And then I have a few friends who play pro soccer and its the same thing with them.”

“The women I know who have money its not the same. They don’t have men throwing themselves at them and laughing at every not funny joke just to get a reaction. But more women do this to men than the other way around. And its sad because some of the men don’t even notice it half the time its happening.”
How I see it

I think this situation exists and isn’t a big surprise. In society where men used to be, or continue to be living with the pressure to make more money than women as part of social status, having rich or successful women is a new thing. It is only until the past few decades that women successfully broke the glass ceiling, and thus, become financially independent and socially competitive. Now, women are as successful as men can be.
Women clinging to men who have financial capacities is undeniably true. It has been said that a successful woman is the one whose husband earns more than what she can spend. This could have been one of the factors why a good number of women concentrate on having a big catch rather than working on their own. Most would think that marrying a rich guy means not having to go to work or even pursue higher education. That perhaps completes the puzzle of why rich men are surrounded by women. These lovely forty-niners (not in all cases, though) are on for the cash and don’t even feel guilty leaving him when the milking is done.

Successful or rich women have an issue on their status as most men find them scary. Being used to patriarchal society, most men are looking for women who are of lesser intelligence or financial capacity compared to themselves. Though there have been some changes as both sexes have enjoyed equality for some periods, men tend to shy away from intelligent women. As some research said, intelligence means power, and men in one way or another didn’t want to position themselves behind women in the social hierarchy. The result? Rich or intelligent women have lesser chances of meeting men for romance than that of an average. Men find average women less ego-threatening creatures. 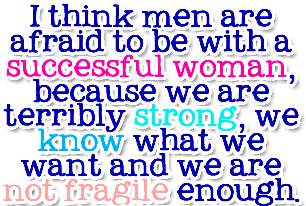 It can never be denied that rich men are infested by spongy women far as how rich women are chased by opportunist men. Besides, not all rich men are out to spoil the woman. But as my personal belief, successful women have more chances to meet a guy of the same status. Why did I say so? When women are educated, she will most likely be around an educated circle, or of any profession she’s in. Those who established themselves and are independent are mostly short of courtiers but have the right to choose the kind of men they want to be with. When you are of lesser status compared to the man, it is a privilege for you to make your life better. This, however, doesn’t work with successful, independent women. For us, educated women, the range of his deposits and properties doesn’t rule out his qualification of being able to love and be a life partner. Successful women can earn money, so why chase rich men?

Is chasing a man for his money acceptable for you?