Sentences that follow a colon, however, are generally left lowercase. If a colon introduces dialogue or multiple sentences, then the first word after the colon is capped.

Notices and signs, such as those that appear on business doors, are often written in title case without quotation marks. If they are long, they are generally written in sentence case and often enclosed in quotation marks. Mottoes and slogans follow the same guidelines, though slogans or mottoes in a foreign language are generally italicized, and only the first word is capitalized.

Personal names are almost always capitalized, unless the individual expresses a strong preference to have his or her name left lowercase (as in the example of bell hooks above).
However, some surnames have parts that are not capitalized.

Courtesy titles, such as Mr., Ms., Mrs., and the like are capitalized.
Abbreviations such as Jr., Sr., and so forth are also capitalized. Though traditionally these abbreviations were set off my commas, such commas are no longer required.

A word or phrase that is used with or instead of a person’s name is capitalized.
If you want to mention someone’s nickname as part of his or her given name, put quotation marks around the nickname.

Actual product names and brands and other objects of distinction are capitalized.
However, generic names for such products are not capitalized.

Titles of books, movies, music albums, collections of poetry, and so forth are generally capitalized and are italicized. In such cases, all first and last words and all other words except for articles, prepositions (regardless of length), and conjunctions are capitalized.
The titles of very long poems, such as the epic poems by Homer, are italicized.
The first word after a colon is capitalized in a title even if it normally would not be.
Shorter poems, chapter titles, headings, and the like are also typically capitalized. Names of poems (and often chapter or section titles) are enclosed in quotation marks when referred to.

In official scientific (Latin) names of plants and animals, the genus is capitalized and the species is left lowercase, and both are italicized. When the genus is abbreviated, the same rules apply. Phyla, orders, and other designations are not italicized.
Common names of plants and animals are lowercased, except when part of the name is a proper noun, in which case the proper noun only is capitalized.

The names of medical conditions; diseases; and procedures, tests, and operations are left lowercase. For diseases that include a proper name, such as Alzheimer’s, that word only should be capitalized.
Names of infections are not capitalized, though the specific names of infectious organisms are capitalized and italicized, like other scientific names.

Many important geographic features are also capitalized.
However, when referring g to two or more geographical features together, the names, but not the feature designations, are capitalized.

Geographic designations are generally capitalized.
Directions, on the other hand, are lowercased.

Titles of military groups—such as militaries, air forces, battalions, and the like—are capitalized, as are unofficial names used to refer to such groups (or Special Forces within such groups, as the Navy Seals).
The names of specific wars, battles, revolutions, and similar military events are also capitalized.

The names of historic periods and events are generally capitalized.

Adjectives derived from proper nouns are often, though not always, capitalized.

Many companies and organizations prefer to capitalize such things as departments, titles of position, and similar designations. In such cases, it is important to learn and adhere to the preferred house style.
No comments:

I don’t want to consider myself a perfectly religious individual. I often have my own beliefs on religion. In fact, my mom and I find that subject the most irreconcilable difference between us. She likes attending traditional catholic mass, I, on the other hand, prefers to do it in random churches.

I have nothing against being dogmatic in religion. I just don’t feel comfortable being fixed with the beliefs not always suited to present lifestyles. I don’t want to wear dress when going to church as catholic dogmas want, but I do believe in God and go there in jeans and T- shirt, never anything that shows skin and steal the scene.


I don’t have intentions of becoming a nun or church choir member, but I do pray to God every single moment. When people around me talk about their strong religious beliefs, I don’t say anything. I believe that people have their freedom to worship in any way they want and I don’t want to brag my ways either.

Nevertheless, I try to live up to the expectations of my religion in my most decent way. If there is something visible about my belief.. That would only include going to the church to light a candle. I guess not all knew this, but I bring my own lighter or match. My grandmother said, lighting my candle from other people’s mean I would be carrying the burden they wanted to get rid of.

Another thing, every Holy Thursday, I do my Visita Iglesia, doing the way of the cross in seven different churches. I have been doing this with my bestfriends for the last five years.

Lastly, I watch or join the procession of religious relics before paying a visit to Molo Church to kiss the crucified Jesus Christ every Good Friday. 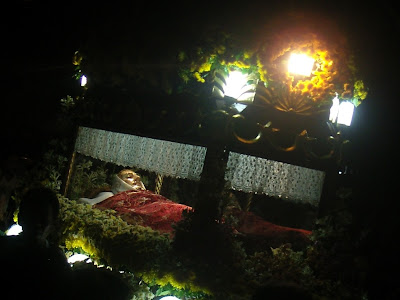 I don’t think this is way enough to pay my religious dues, but that’s closest to the best I can do. Most of the things I do for my religion are kept secret. It is between me and God.
No comments:

John Paulo Edrosolano
Nowadays, we’ve had encountered a lot of problems, but all these has an end. One of the problems that is really hated by the public is calamity. What is a calamity? A calamity is a disastrous situation or event happening in our environment, resulting to damage of all natural resources that man depends on. There are many kinds of calamity that will forever exist, like earthquakes; a shaking of the ground. It can be a slow and sometimes it is violent enough to tear down mountains and cities with one big strike. A hurricane, a powerful, whirling tropical storms, is also a kind of calamity. Hurricanes are also called Willy-willies , cyclones or typhoon. For example was what happened in Anda, Pangasinan when many homes were destroyed by a strong wind as “Typhoon Emong” pounded the place, happening last June 2009.

Also, tsunami is a kind of calamity. It is a huge wave that begins when the sea floor is violently shaken by an earthquake, a landslide or a volcanic eruption. All calamities that are mentioned are caused by climate change.

Climate change is a rapid modification in the atmosphere; it is getting warmer, colder, wetter or drier. There are many theories why it is happening, and one cause of climate change may be shifts in the earth’s orientation to the sun. Many, however, believes that the main reason this calamity happens, is how we treat nature.

When calamity strikes, it is a big trial for us to pass through. The effect of calamity was very terrible; all human resources that we depend on will be destroyed. It can destroyed farms, and houses like those in Anda, Pangasinan last 2009. As I said, a typhoon destroyed all the infrastructure people in that city depended on. After a strike, it leaves many people to suffer, and it results to lack of shelter and clothing. Also, it causes hunger to victims. In that situation, the government had declared that the city be placed under the state of calamity, that they needed more attention and help to survive the challenges of the nature.
In our country, we had already encountered many kinds of calamities. Like what happened last June 21, 2008 when super typhoon strokes our country causing floods to most of the part of our nation. This typhoon was called “Typhoon Frank”. Most of us can never forget how it affected the whole nation. Typhoon Frank was one of the biggest calamities that we had encountered. Also, it is the greatest calamity that affected the whole city of Iloilo. One-third of 1, 691, 000, citizens of city of Iloilo, were left homeless because their houses were destroyed. All damage infrastructure that the typhoon left had cost nearly P 1,500,000,000. That time, the city of Iloilo was deeply in help and needed more support in giving the primary needs for all the victims. With all the damage that typhoon Frank left, we needed long time to stand up and start living normally again.

Also this year, last February 21, a volcanic eruption shocked Sorsogon as Mount Bulusan erupted. Mt. Bulusan puffed cloud of ashes that headed towards south and has reached Irosin ,City having 46,000 inhabitants affecting the health of all the citizens near in the explosion . An evacuation was ordered and over 100 families affected of the ash falls left. But thanks to God, the ash fall stopped in just two week and people had their lives back.
There are some ways to lessen the damage of the coming calamity. Because we are not aware of when it will strike, preventing high number of casualties should be our government’s concern. They should always prepare and remind citizens of what are the best things to do when facing a calamity. Also, all weather stations should always be active to remind the public of a coming calamity, so preparations can be made . If the public can prepare, they can avoid bad things from happening. The purpose of the government agencies is to give information if there is a change in our atmosphere. With this, we can be more aware with the consequences of the things we do as we treat our mother nature.

*** PLAGIARISM IS A CRIME. CONTACT THE AUTHORS/BLOG ADMIN FOR REPRODUCTION OF ANY PART OF THIS PAPER. ALL ARTICLES HERE ARE MONITORED BY COPYSCAPE, SO ANY LEVEL OF COPYING CAN BE DETECTED BY PLAGIARISM SOFTWARE.
No comments: